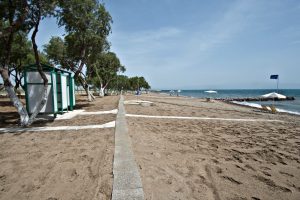 Lesvos or Lesbos is the third largest island of Greece and has a long history that goes back more than 3.000 years. It has been the birthplace of famous people, such as the poets Sappho and Alcaeos, Arion the Guitarist, and Pittacus, one of the seven wise men of ancient Greece. A tradition that even continues today and gives the island that distinctive atmosphere which makes it so different from the rest.

Mytilene is the capital of the island and has a population of 30,000 people. This is about one third of the total population of the island. It is built amphitheatrically around its well preserved Byzantine Castle. Not very far from there, on the north-east side of town, one can find the Hellenistic Theatre with its superb acoustics and capacity of 10,000 people. Further in the suburb of Varia one can visit the Theophilos Museum. 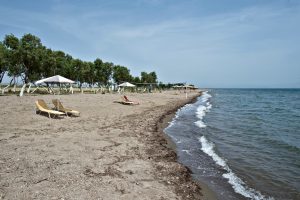 Twelve kilometers from Mytilene, near the town of Moria, one can visit the Roman Aqueduct that was built in the second century AD. Going further up north by the east coast, thru a series of beautiful little villages one will arrive in the town of Mantamados, famous for its cheeses and the fine pottery. The next stop will be Skala Sikaminias, one of the most charming fishing villages one would ever see.

And then, at the northest point of the island one will find the picturesque village of Mithymna (also known as Molivos), with its mediaeval castle and the traditional architecture. Molivos is also the islands best known resort. By some it has been called “the closed place to paradise, on earth”. The association with Arts is appropriate enough, for it was here in Mithymna that the head of Orpheus is said to have been washed ashore after his dismemberment of the Thracian women. Another mythical citizen of Mithymna was the lyric poet and musician Arion. It has been said that he has been saved by the music-loving dolphin.

Only a short distance of 5 Km SW of Molivos the village of Petra can be found. Petra has one of the best sandy beaches of the island. Again further south the village of Agia Paraskevi is situated. This village has a lot of old mansions and is known for the Bull Festival that has been celebrated since more than two hundred years. Near the village lay ruins of an ancient temple of Napaios Apollo and the ruins of an Ionian temple dated from the 3rd century BC. This temple was dedicated to Zeus, Hera and Dionysos. 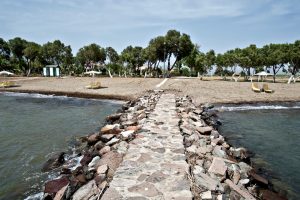 In the island’s center, not far from Agia Paraskevi, lays the modern town Kalloni. It is famous for its sardines which are caught in the nearby bay called the Gulf of Kalloni. On this gulf one will also find the popular summer resort Skala Kalloni with its beautiful sandy beaches.

HERE IS WHERE KALLONI VILLAGE Apartments ARE CONVENIENTLY LOCATED CLOSE TO VIRTUALLY EVERYTHING BEING IN THE CENTER OF THE ISLAND AND AT THE SAME TIME ONLY A FEW METERS AWAY FROM SKALA KALLONI’S GULF LONG LONG “BLUE FLAG” SANDY BEACH!

HERE IS WHERE KALLONI BEACH Villas ARE CONVENIENTLY LOCATED CLOSE TO VIRTUALLY EVERYTHING BEEING IN THE CENTER OF THE ISLAND AND AT THE SAME TIME ONLY 100 METERS FROM SKALA KALLONI’S LONG LONG “BLUE FLAG” SANDY BEACH!

Also near the center of the island another well known town is Agiassos. This town is famous for its pottery. Going further south again we reach the towns of Plomari and Vatera which have the most superb beaches of the island.

At the western tip of Lesvos, Sigri is a pretty fishing village with a nice little beach and a castle that goes back to the 18th century. Not far from there lies the Petrified Forest, dating back fifteen million years. Finally, not far from Sigri, one will find the town of Eressos. Eressos has been the birth place of Sappho and Theoprastos. Its port, Skala Eressos, is a famous resort with a magnificent beach.

Lesvos, as it can be seen from its classical history, its abundance of poets, musicians, philosophers and lawgivers, was one of the great cultural centers of the Greek world. It was second perhaps only to Athens, in its influence if not in its power. As a place for a holiday, for a rest or for quiet work, Lesvos is HARD to BETTER. It is big enough to permit that change of scene so necessary if one is to avoid “island claustrophobia”. It has a further advantage that it is easy from here to organize a trip to visit Troy or to explore the coastline of ancient Ionia.

To check availability and rates please fill out the form below and we’ll get back to you within 24 hours.